That night (19 March) as we walked along the busy street after a therapeutic massage session, she asked if I had noticed that the night appeared to be brighter and there were no street lamps around us. I paused and looked around. “Oh ya, it is brighter.”

And we looked up at the moon at the same time. It was a full moon, directly above us in the sky, and basking us in its almost white fluorescent glow.

We immediately started struggling to grab each other’s hands, seeing who would be the first to point at the moon.

You see, legend has it that long ago in the far far away land, there was a moon goddess who did not take very kindly to little children pointing their dirty grubby hands at her full shining moon. Those who did will always find a long cut at the back of their ears the next day. The cut will hurt enough to cause slight pus but it will not bleed. The cut will eventually heal around a week or so but not before driving the poor kid nuts with the itchiness as it turns to scab. That is until the child points to the full moon again. (I tried pointing at the moon a few times just to prove the myth was false when I was five and I always got cut without fail.)

The amazing part is out of seven billion people in the world, TWO people – me and her – found the only other person who believes in the same legend. TWO out of over four million people in this city who resolutely believe that the full moon will cut our ears if we were ever rude enough to start pointing at it.

Which is why we always attempt to grab each other’s hands so we can force the loser into pointing at the moon. The victor will then spend the rest of the night taunting, “Orh… You pointed to the moon. You’re gonna get a cut now. The moon god is going to punish you.”

This, as you can imagine, has caused a few upsetting moments because we would really make a lot of “noise” and start whining if we were forced to point at the moon. Or she will resort to (mock?) anger so I would stop disturbing her.

That night as I failed to grab her hand because she was smart (or strong) enough to keep her arms down, I accidentally raised my hand to the air to trick her. I panicked and she noticed.

“I never! I didn’t do it on purpose! It was accidental.”

“Ha you did it on purpose. You did, you did! You will get cut tomorrow.”

By now my face was flushed and guilty and she was gloating like how a smirky but adorable arse like her would. 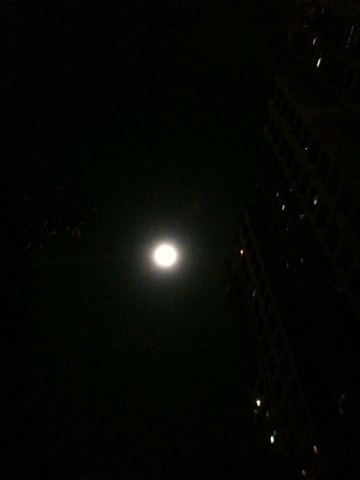